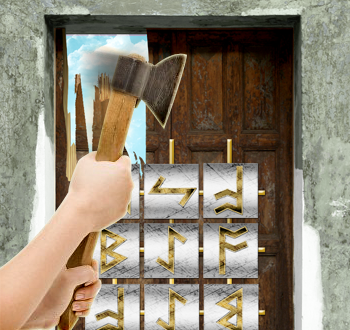 There's a time and a place for brain teasers, and it isn't when they're shoehorned into videogames.

Whether you're working out the proper sequence to press broken piano keys in an abandoned school or rearranging the works of Shakespeare on a bookshelf to uncover a secret code, videogame puzzles can often feel less like a part of the game, and more like an intelligence test doled out by a developer. In Issue 284 of The Escapist, Jonas Kyratzes makes the case that these kinds of puzzles are detrimental to a game's immersion, no matter how intricate and clever they might be.

A simple wooden door stands between you and the next step of this adventure. But wait! There's something strange about this door. Several objects seem to be attached to it, and there's no keyhole. Weird.
Coming closer, you realize the objects are actually sliders.

On each slider there are twenty-seven mystical symbols that seem faintly familiar. Gingerly, you touch one of the sliders, and it moves - but as it does, the symbols on the other sliders change! Hmmm. You move another slider, and the same thing happens again. You begin to see a pattern.

You apathetically poke the sliders around, knowing you could solve this, but this is like overly complicated math... [But] wait a minute ... This is a wooden door, and you have an axe in your inventory ... You open your inventory and take the axe, and you smash down the door. With every bit of wood that flies past your ears as you laugh maniacally, hacking and hacking, you are drawn back into the adventure, and now it is all real, and you're there, and as you step over the splinters of those annoying sliders you see that you have found something truly remarkable, and your journey has only begun.

Kyrates says that while there is a place for mental challenges in videogames, they need to be a part of the game, not aggravatingly and obviously separate from it. You can read more about in his article, "Give Me an Axe, I've Had Enough of This Puzzle."

The Escapist Presents: Whispers of the Goddess - A Short, Twisty Puzzler WMDogma 1 Comment