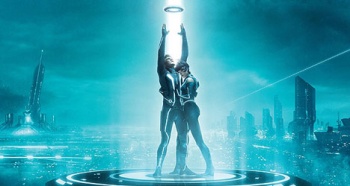 Videogames can help broaden a franchise and keep audiences engaged after the movie ends.

Steven Lisberger, who directed the original Tron movie and is a producer on Tron: Legacy, said that in some cases, videogames were an opportunity for Hollywood studios to test out their wilder ideas without the costs involved in making a full movie.

Lisberger was referring to Tron: Evolution, and its Wii counterpart, Battle Grids, which fill in some of the 28-year-gap between the first and second Tron movies, a time span perhaps a little too broad for a two hour movie, but just right for a videogame. He thought that having videogames as a place where Hollywood could develop its grander ideas was a good relationship for the two mediums to have.

Disney CEO Bob Iger added that games were a way of keeping people engaged with a movie franchise beyond just the theatrical releases. He was especially excited about the opportunities afforded to Tron: Legacy by 3D gaming, which he thought created a more immersive experience, which in turn would draw people even further into the Tron universe.

The idea that tie-in games like Tron: Evolution should relate to the movies that spawned them, but not necessarily be a straight film-to-game conversion has a lot of merit. Of course, a slightly different idea or focus does little to counteract the effects of a rushed development cycle to get the game out in time for a movie's launch. The best tie-in game might just be the one that comes after the movie, not before.