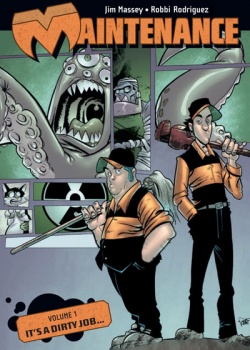 Maintenance is a comic about janitors who work for evil geniuses, and DreamWorks Animation just bought the film rights.

DreamWorks Animation's most recent release was Megamind, a movie about a supervillain and his superhero foe. The animation company isn't letting go of evil geniuses just yet, though. DreamWorks has just acquired the rights to the comic Maintenance, a series set in the world's largest think tank for evil science. Jim Massey (Death Takes a Holiday, Stephen Colbert's Tek Jansen) and Robbi Rodrigues (Hero Camp, Stephen Colbert's Tek Jansen) are the co-creators, and Maintenance is published by Oni Press, best known for Scott Pilgrim and Wasteland.

Manny and Doug are the series's protagonists, janitors employed at TerroMax, Inc. Oni describes Manny and Doug's as "not your typical custodial crew," exclaiming, "when they're not dealing with toxic spill monsters and talking mansharks, they still have to worry about mad scientists, crazy would-be dictators, and the cute girl who works at reception!"

DreamWorks actually pulled the rights right out form under Warner Bros., who had been setting it up as a picture for director McG (Charlie's Angels, Terminator Salvation). Joe Ballarini was penning the script for Warner Bros., and seeing as I've never heard of any of his five writing credits (including Dance of the Dead and Father vs. Son), I'm sort of glad DreamWorks acquired the rights.