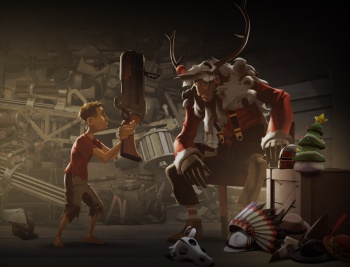 It's Australian Christmas for the Team Fortress 2 gang, which means hollowed-out reindeer skulls, indentured servitude for naughty children and a trip back to the tenth century for a brawl in a medieval castle.

Christmas is coming and that means old Nick Crowder is too. He knows if you've been naughty or nice, and if you've been naughty you can expect to be hauled off to the South Pole, where you'll spend the next year making and wrapping toys for Nick. After he's done unwrapping them all, he'll put the duplicates up for sale online, where you can buy them dirt cheap. And that, my friends, is Australian Christmas.

But wait! There's more! There are special Festive Crates that can only be opened with a special Festive Key! And how about the new Medieval Mode, an old-tymey Controlle Pointe map in which players "gette it onne!" In a Terminator-esque twist, the TF2 team couldn't bring their weapons with them through the magic-powered time vortex (clothes, fortunately, were able to make the journey), so this battle is all melee, all the time!

Valve is doing its part to encourage the fine holiday tradition of giving them money with the addition of a bunch of new hats in the in-game store, and a new donation system for community map makers is also up and running, which I think we can all agree is pretty damn cool. Interested? Of course you are, so head on over to teamfortress.com to read more about the miracle of Australian Christmas!