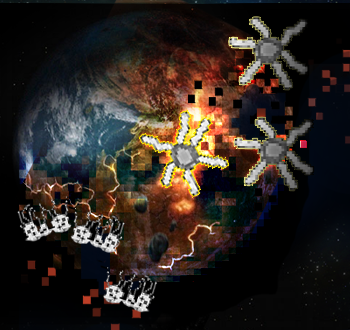 When one indie developer let his ambition run away with him, what he ended up with was broken and glorious.

Sometimes, what we learn from success is vastly outstripped by what we learn - both technically and personally - from failure, especially when that failure is especially grand. In Issue 285 of The Escapist Jonas Kyratzes talks about the grandest failure he ever made, built on the back of hubris and unfinished software tools.

This was brought home with painful clarity when I tested a new game-making application called Construct. As someone who's always been more designer than programmer, game-making software had always appealed to me as a concept, but the actual apps I'd encountered so far had seemed terribly unintuitive. Construct was a revelation ... man, wouldn't it be awesome to make this insanely huge platform/exploration game, with graphics in the style of my beloved Metroid II, allowing the player to really delve into this strange new world? With the help of Construct, I could do things that my meager programming skills would never let me do otherwise.

A huge, ambitious game made with software that hadn't even reached 1.0? Bring on the challenge!

Hypnotized by the world I was building and caught in the belief that this game was it, this one would be my breakthrough, I ignored another opening whirlpool ... Construct had a memory leak. It was big, rapidly approaching humongous. And now the crashes began. But it was just the development environment, not the game, so everything was all right. Right? Right ... How many times did I post to my website that the game was almost done? Yes, it would be done next week. In two weeks. Next month. I believed it, too. Then it crashed again. By the end, it was crashing after every four actions I took.

At this point, a rational person would have stopped. I was running out of time, money and endurance. But I was lost in the ruins of Earth. Not finishing the game now seemed like a death sentence. It had to be done. It had to be finished.

The resulting game, Phenomenon 32, was prone to crashing and bugs and never really found an audience, but Kyratzes still thinks about the journey fondly. You can read more about the experience in his article, "The Game That Ate the Earth."