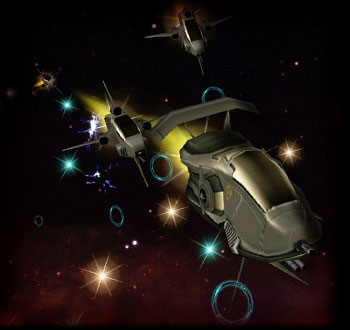 Space-shooter Allegiance was ambitious and well received, but ultimately, it was the wrong game, in the wrong place, at the wrong time.

At first glance, there isn't a lot of crossover in the worlds of game development and on-screen text display technology, but that didn't stop the Microsoft Research Group, or MSR, from making and shipping a 3D space battle MMO called Allegiance in March 2000. Sadly, timing and circumstances seemed to conspire against MSR's ambitious project, and in Issue 285 of The Escapist, Justin Emerson takes about the rise and rather rapid fall of the online space shooter.

Allegiance shipped to great reviews ... The space combat was deep - ships had complete free range of motion, with a main engine in the back and omni-directional thrusters. But initial sales were bad - by the end of the year it had sold less than 30,000 copies. For a title published and promoted by Microsoft, this was a huge disappointment. And sadly, when a multiplayer-only title starts losing its player base, the effect begins to snowball. What happened?

"First, the spacecraft action game genre was in decline, there had not been (and still arguably has not been) a commercially successful space shooter game since the mid 90's," explains Girling. "Secondly, 'multiplayer only' action games appealed to the hardest of the hardcore gamer, which further reduced the potential appeal. In addition, the game required a subscription to the [Allegiance] Zone to play in the big games, which at that time was still an experimental business model and only worked ... with RPG titles."

The last problem, relates Dehlin, was one the team had little control over. "Right before we shipped, the games division inked a $100M deal with Digital Anvil, who happened to have a game in the same category: space. Microsoft put all of the marketing behind Starlancer and hardly any behind Allegiance. Most of our marketing was word of mouth and great reviews. That year, Allegiance dominated Starlancer in game reviews, but sales were awful."

It took just over a year for Microsoft to withdraw support for the game, but against all odds it lives on, supported by a dedicated community. You can read more about it in Emerson's article, "The Greatest Game Never Played."