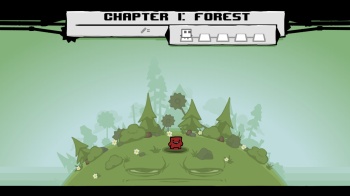 Edmund McMillen of Team Meat says there's a simple reason Super Meat Boy isn't coming to WiiWare: Nintendo's limitations on the platform would make it a "piece of sh*t version" of the game.

Super Meat Boy was originally announced for the PC and WiiWare in 2009, while plans for an Xbox Live Arcade were revealed in February 2010. But although the 360 and PC versions came out in November and December respectively, the WiiWare edition was nowhere to be seen. Then yesterday, Team Meat dropped the bad news on Twitter.

"ATTENTION: there will not be a Wiiware version of SMB," the studio wrote. "we are looking in to retail Wii, bit its also looking grim. still looking though."

What happened? The 40 megabyte limitation on WiiWare games apparently proved too stringent to overcome; the game would have no leaderboards, no Dark World levels, no DLC support and no music in boss fights and cutscenes. "There is no way to avoid the fact that if we released a 40MB version of Super Meat Boy it would be a shit version of the game," McMillen told Joystiq. "It's a lose-lose situation, but the fact of the matter is if we release a shitty game, we will have to live with that for the rest of our careers and have to cop to the fact that it is a shitty game."

McMillen said Team Meat assumed it would be able to swing a deal with Nintendo to work around the size limit, but Nintendo refused to budge and the developers refused to compromise the game. A retail release is now being considered but that's apparently not looking too good either, despite the game's success on other platforms.

"Right now we have talked to three larger publishers who have passed on the title because they believe Wii retail is a bad idea profit-wise," McMillen explained. "Most places we have talked to believe that only Nintendo brand games sell well on their system and don't even understand why we want to release Wii retail."

Despite the hassle, the situation hasn't poisoned Team Meat's feelings toward Nintendo or anyone else. "Don't let this or the fact that SMB isnt releasing on PS3 or Wiiware fool you into thinking we don't [love] Sony or Nintendo, we love them all," he said. "If we had the ability the game would be released on ALL systems, but it just doesn't seem like that was in the cards this time."

Super Meat Boy is available now for the Xbox 360 and PC; a Mac version is planned for release sometime in 2011.