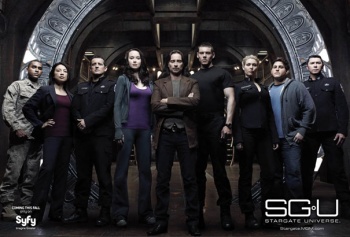 SyFy doesn't have the final say on what happens on Stargate Universe, but the show will need to find more funding pretty quickly.

The news that SyFy would not be picking up a third season of Stargate spin-off, Stargate Universe, was not only disappointing, it also seemed to spell the end of the show. But SGU's producers say that there is a glimmer of hope for the show, albeit a very faint one, and they're trying everything they can to keep it alive.

The key point is that SyFy does not own the Stargate license, MGM does. While the licensing fee that SyFy paid for the show constituting a significant part of the show's budget, it wasn't all of it. If the show could find other partners willing to contribute enough to make up this short fall, the show could go on. Executive Producer Joseph Mallozzi didn't sugar coat the show's chances though, saying that it didn't look good, and that it was incredibly long odds that the show would be back for a third season.

Responding to questions from fans of SGU on his blog, Mallozzi said that there was a chance those odds could increase if fans showed their support for the franchise. He made it clear, however, that the executives would look at it from a business point of view, so while letters and emails were good, DVD and digital sales carried a heck of a lot more weight.

It's pretty clear that it's going to take something pretty extraordinary for SGU to keep going, so it's probably best to assume that it's finished. Still, it's hard not be little bit hopeful that the show might get a last minute reprieve, even though it's almost certainly not going to happen.

The final ten episodes of season two of Stargate Universe will be shown on SyFy in the spring.