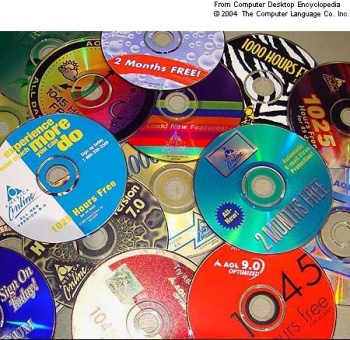 It turns out that AOL spent a lot of money to send you all those free CDs over the years.

Remember how, all the way through the 1990s, America Online bombarded the general public with tons of free CDs promoting its service? My friends and I sure do, as we would often thank AOL for providing us with an enormous set of free coasters for our apartments. It turns out that AOL spent a lot of money on that marketing campaign, which (for a while) was incredibly effective at getting people to subscribe.

A question on Quora.com asked how much AOL spent on the campaign, and former CEO Steve Case was one of the many folks who contributed to the answer. According to Chase, the cost was so great that it equated to spending $35 for each subscriber the service received:

I don't remember the total spending but do recall in the early 1990s our target was to spend 10% of lifetime revenue to get a new subscriber. At that time I believe the average subscriber life was about 25 months and revenue was about $350 so we spent about $35 to acquire subscribers. As we were able to lower the cost of disks/trial/etc we were able to ramp up marketing. (Plus, we knew Microsoft was coming and it was never going to be easier or cheaper to get market share.) When we went public in 1992 we had less than 200,000 subscribers; a decade later the number was in the 25 million range. That helped drive our market capitalization up from $70 million at the time of the IPO to $150 billion when we decided to combine with Time Warner to accelerate our transition to broadband and diversify our revenue mix.

For a while, a lot of people were subscribing with America Online. At one point, the number of total subscribers was reported at roughly 30 million (a bit higher than Case's estimate), though it's dropped a bit since then. As of June 2010, AOL reports that it has about 4.4 million subscribers. Sounds like AOL's marketing department needs to come up with a similar program to get the numbers back up ...