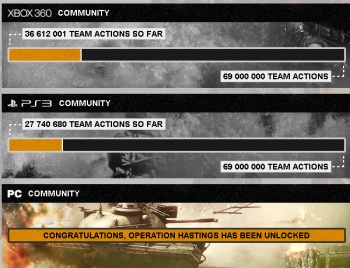 When DICE released the Vietnam expansion for Battlefield: Bad Company 2 earlier this month, it did so with a challenge to gamers: perform 69 million collective team actions on your platform and be rewarded with a remastered version of the "Operation Hastings" multiplayer map. Team actions, for those unfamiliar with the game, include spotting, performing repairs, and healing, reviving and resupplying your fellow soldiers. To ensure a fair start, since the Xbox 360 and PS3 versions of the expansion came out a few days after the PC release, DICE began counting on December 22.

And in only eight days, PC gamers have pulled it off, enabling the fifth BFBC2V multiplayer map on their platform. The 360 and PS3 communities, meanwhile, are lagging way behind; according to the Battlefield: Bad Company 2 website, Xbox 360 gamers have amassed roughly 36.6 million collective team actions, while the PlayStation 3 crew has only managed 27.7 million.

On behalf of the die-hard PC gamer community, I would like to take this opportunity to point and laugh. But please, don't feel too badly about it; the numbers are rising quickly and I'm sure that console gamers will be playing "Operation Hastings" any day now. In the meantime, we'll try not to have too much fun without you.