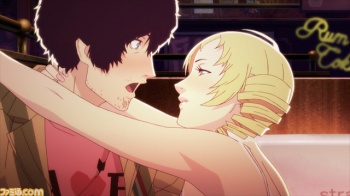 Catherine will soon be getting a lot less mysterious. Probably.

Catherine looks all kinds of intriguing, but the strange, disjointed trailers - not to mention the language barrier - don't really help in getting a feel for what the game is about. That's not just limited to Western gamers hopeful that the game might make it out of Japan, however, as speaking the language doesn't seem to help in understanding what's going on.

In a blog post on the game's official site, director Katsura Hashino said that people had voiced a number of concerns to him about the game's content. Some people were concerned that it might be too sexual and that they wouldn't be able to buy it, while others flat out didn't know what the game was about. A recent Famitsu article gave some insight into Catherine's gameplay, where protagonist Vincent must climb a huge tower made of blocks in a recurring nightmare, but that is only the action portion of the game, and the adventure portion still remains largely a mystery.

Hashino doesn't say exactly when the demo will come out, but as the game comes out in Japan on February 17th, it will presumably be before then. Of course, whether a demo will actually make things clearer, or just make them confusing in a different way, is anyone's guess.