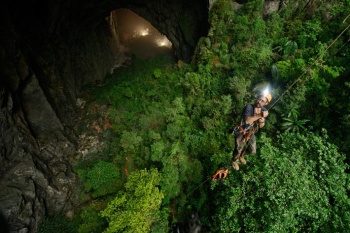 In a remote area of Vietnam lies a massive cave that could house a city block, and probably holds some ancient secret Nathan Drake is looking for.

There's a hidden world in Vietnam's Annamite Mountains called Hang Son Doong that sounds like it could be a location in an Indiana Jones film or Uncharted game. The multi-million year old cave has barely been explored and is one of the largest in the world.

So large, in fact, that you could park a 747 inside of one of its areas, and its 300-foot-wide, over 600-foot-tall passage could house a skyscraper. Han Son Doong, which translates to "mountain river cave," even contains its own jungle of 100-foot-tall trees and "wispy clouds" can be seen near its ceiling. National Geographic describes it as thus:

The light beaming from above reveals a tower of calcite on the cave floor that is more than 200 feet tall, smothered by ferns, palms, and other jungle plants. Stalactites hang around the edges of the massive skylight like petrified icicles. Vines dangle hundreds of feet from the surface; swifts are diving and cutting in the brilliant column of sunshine. The tableau could have been created by an artist imagining how the world looked millions of years ago.

National Geographic followed the second expedition to ever enter the massive cave, with the first taking place in just 2009. The entrance would have remained secret if not for a local that discovered it as a child, but forgot about it for years until a recent rediscovery.

Han Son Doong is estimated to have formed 2 to 5 million years ago, and is just one of many caves still not surveyed in Vietnam's Phong Nha-Ke Bang National Park. In the second expedition, the cave's explorers were able to surmount the 200-foot-tall wall of mud that ended their first effort make it through, but they say there is still much work to be done until they're done with the 2.5 mile Han Son Doong. The cave is an explorer's dream, and gives legitimacy to the secret worlds found in games like Uncharted 2. It likely doesn't house the tree of life though, so don't become a violent warlord on its account.