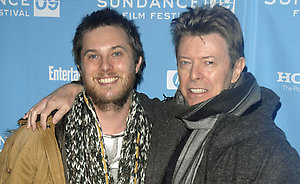 Jones has got a pretty impressive pedigree. He is the 39 year old son of glam rock legend David Bowie and the American model Mary Angela Barnett, and because of that he's also known as Zowie Bowie or Joey Bowie. Jones directed the independent science fiction film called Moon starring Sam Rockwell, which in 2009 won the BAFTA for Best British Independent Film and netted Jones the Douglas Hickox Award for a great debut into the British film industry. On top of all that, Duncan Jones is a lifelong gamer, and he is "hugely jealous" that Sam Raimi is directing the silver screen adaptation of Blizzard's monster MMO World of Warcraft. But he's also pretty sure that Raimi is approaching the source material the correct way and that the film may be the best videogame movie to date.

"I'm hugely jealous of Sam Raimi. I really believe World of Warcraft could be the launch of computer games as good films," Jones said. "From the little I've read of interviews with him the way he's approaching it makes so much sense. It's not worrying about how the game plays, it's about creating the world of the game and investing the audience in that world."

He thinks that is the problem that many directors have had adapting games is that they are not true gamers like he is.

"I'm very cynical of the number of directors who say they're actual gamers," Jones said. "I'm a real gamer and I think there are less real gamers involved in directing only because you have to spend so much time making films that there's no time to be a hardcore gamer. I'm just slightly insane and I stay up all night playing games."

Yep, he's one of us. If Raimi doesn't work out, maybe Jones would be a good substitute?