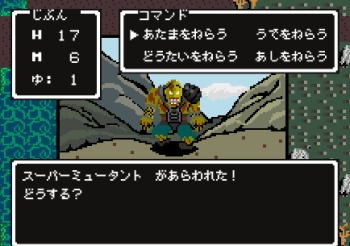 I don't really "get" the 8-bit demake thing. I was never really what you'd call an 8-bit gamer, which I'm sure has some bearing on it, but I just don't see the hook. You know what else I don't understand? Japanese. So as you'd imagine, Bethesda's 8-bit JRPG demake of Fallout 3 goes way over my head, but I'm still having fun poking around inside it.

It's not easy conversing with people or battling Super Mutants in an utterly foreign language but it does engender a certain atmosphere of exploration and a real feeling of accomplishment when whatever you're doing appears to pay off in one way or another. Seeing an old-school, top-down map of the Capital Wasteland is pretty cool too. The site also includes a tour of the world of Fallout, although like the game itself, it's probably a lot more fun if you speak the language.

It can wear thin pretty quickly but I suppose it's possible that what really matters here isn't playability but authenticity. After all, as Bethesda pointed out, the JRPG demake is "just like that import copy of Final Fantasy 5 you nabbed in the 80s." Except this time around you don't have to pay for overseas shipping or mod your console in order to play, you just have to point your mouse at Bethsoft.com and give it a click. So what say you, JRPG fans? Do we have a winner?