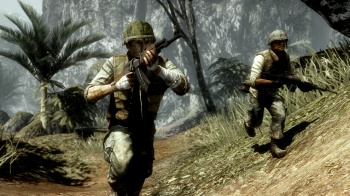 If you're a PC gamer who is still using Windows XP, it's time to upgrade - or stay off of DICE's next Battlefield.

It may not be quite as big a name in mainstream gaming as Call of Duty, but there's no denying that DICE's Battlefield series is a FPS force to be reckoned with. The developer has said that it will be putting "special effort" into the PC version of the upcoming Battlefield 3 - but unfortunately, that means leaving the past behind.

Fan site BF3blog unearthed an overlooked Twitter post from the past summer posted by DICE rendering architect Johan Andersson. According to Andersson, the game engine used by Battlefield 3 is advanced to the point where it will not support what was once the dominant operating system among PC gamers: If you're still using Windows XP, you need not apply.

"Frostbite 2 is primarily developed for DX11. XP & DX9 is _not_ supported, 64-bit OS is recommended. Lots of time to upgrade if you havent!"

Though this is not official confirmation from DICE that BF3 won't run on Windows XP, if the engine doesn't support the venerable old OS that's one huge kick in the side. If true, this is a bold move for DICE - according to Wikipedia, Windows XP accounts for 44% of OS usage on the market today.

Among gamers, however, this may be a different matter: Valve published its monthly hardware survey results today, showing Windows 7 gaining ground and Windows XP losing it. Windows 7 (64-bit) was the most popular OS among Steam users, accounting for 36.66% of results (up almost a full percentage point from November) - and while it was still in second place, Windows XP (32-bit) fell a percentage point to 25.75%.

So while this is a gamble for DICE to potentially alienate a good quarter of its potential market, it is probably a calculated one: There's a good chance that the hardcore gamers who would play a game like Battlefield 3 are the ones that have already upgraded to an OS like Vista or Windows 7.

If not, well, it'll also be coming out on Xbox 360 and PlayStation 3. Better than nothing, right?