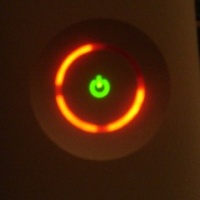 The BBC Radio 4 program You & Yours dramatizes customers complaining that Kinect caused their Xbox to crash.

Microsoft released Kinect in Europe and the U.K. on November 10th but many people didn't shell out the £130 until the Holidays. Unfortunately, some of those poor souls were disappointed when they hooked up the motion sensor to their Xbox and were only rewarded with the dreaded red ring of death. The BBC program You & Yours had professionals read some customer complaints that were posted on a forum online and spoke to a 10 year old who told the story of what happened when his Dad brought home a Kinect.

"My non-problematic 2008 [Xbox] 360 Pro got red rings of death after playing Kinect two to three times with light use," one woman said.

"I never had a single issue with my Xbox," another said. "I got Kinect for Christmas and the screen started freezing randomly. Then on New Year's Eve, bam, I got the red ring. Very sad."

"Yes, I got the red rings of death on Christmas day," an older gentlemen read. "The very same day my kids got a Kinect."

"We plugged [Kinect] in that day and we had a go on it," said 10 year old Adam Winnifrith. "We only played on it a few times and then when we went to play it on New Year's Eve it had red lights." At first Adam thought that it was malfunctioning because of the three controllers that he had plugged in so he started pressing all of the buttons. "But then when Daddy had a look at it thoroughly, he figured out the proper reason why it didn't work." Adam hasn't been able to use his Xbox with or without Kinect since. "It's quite a shame because we got loads of games for it."

Adam's father James was also disappointed because he wasn't able to have the karaoke contest that he planned for New Year's Eve and was doubly upset because the warranty on his Xbox had expired on December 14th, 2010. "I'm going to contact Microsoft and see if they'll extend the warranty slightly because it's so close," he said. He is sure that the problems he had are due to the Kinect and not some cosmic coincidence.

"It's been working fine for 2.5 years, you plug in something new and within a few days it starts going wrong," said James Winnifrith.

It's possible that these problems only occur with older models of the Xbox, as it seems that many of the complaints come from longtime owners. There is no word from Microsoft on whether Kinect actually causes these problems or if it's all just coincidence, smoke and mirrors. Perhaps if enough people tell their stories like they did on this BBC show, we will get some answers.

Movies and TV: The Escapist's Favorite Things About Doctor Who The Escapist Staff 22 Comments

Gallery of the Day: 8 Best Selling Games For The Xbox 360 DrStrangelove 17 Comments
Comments on