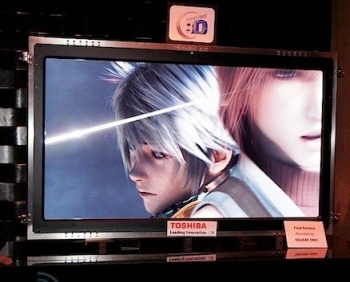 Everybody thought that big screen TVs showing true 3D without the aid of glasses was a pipe dream until Toshiba showed off its sets at CES.

It couldn't be done, skeptics said. Producing 3D images without wearing silly-looking and most likely heavy glasses was limited to a single viewer or small screens. That will work with devices like Nintendo's forthcoming 3DS, but no one thought that TVs using autostereoscopic technology would replace the big ass TV in your living room any time soon. When Japanese electronics manufacturer Toshiba said at last year's Consumer Electronics Show that it would soon bring glasses-free 3D to its bigger screens, people laughed it off. This year in Las Vegas though, Toshiba presented prototypes 56-inch and 65-inch playing the cinematics from Final Fantasy XIII. Toshiba already sells 12" and 20" version of the technology in Japan, and it plans to release two bigger models worldwide by the end of its fiscal year, which could be as late as early 2012. Atsushi Murasawa from Toshiba couldn't confirm prices or release dates but did say that he hopes to grab a 10 percent share of the U.S. market with these TVs.

I've been on the fence about the whole 3D thing. The net gain of my entertainment value that 3D provides is probably less than nil. When it's handled badly, it kind of sucks the life out of a film (or a game I suppose but I haven't had prolonged exposure to 3D gaming yet.) And when 3D is actually well done as in Avatar, it doesn't add enough to justify the cost and annoyance. I saw Tron: Legacy in 3D and I couldn't honestly tell you why it mattered.

But the biggest block against people running out for a brand new 3D TV - aside from the fact that we all dropped a buttload upgrading to HD not too long ago - is the need to wear the damn glasses. If Toshiba's tech proves to be as great as it seems to be, then perhaps it will change the paradigm and more people will be switching to 3D.

What do you think? Does the glasses-free big screen TVs from Toshiba sway you into the 3D camp? If you had the money, would you consider buying one over a TV from, say, Sony that made you wear glasses?