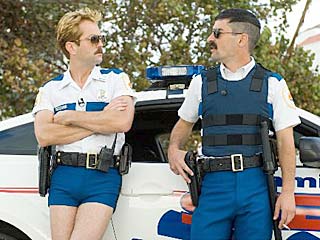 Trading in their guns for shillelaghs, two former Reno 911! cops are writing a film about an amnesiac leprechaun.

Tom Lennon and Robert Ben Garant are perhaps best known for their roles on Reno 911! (as Lieutenant Jim Dangle and Deputy Travis Junior, respectively), but have been writing partners for years. Their screenplay work includes Herbie Fully Loaded, Night at the Museum, and now The Wee McGinty, an amnesiac leprechaun film they're rewriting. Lennon and Garant are taking over the project from Mark Gibson and Phil Halprin, the writing team of Snow Dogs and The Wild. Additionally, Garant is set to direct, with Lennon appearing in a major supporting role.

Deadline quotes "an insider," who says in imagining The Wee McGinty, we should, "think Bourne Identity, but plug in a leprechaun instead of Matt Damon." We all know how reliable those "insiders" can be, so normally I'd advise to take this one with a grain of salt. In this case, the provided plot description is pretty thorough, and, knowing Lennon and Garant, sounds just about right.

The Wee McGinty is said to be about a leprechaun, stricken with amnesia, working with some firefighters in Chicago. Things take a turn for the bizarre when our protagonist is found by what Deadline calls "his paramilitary leprechaun brethren." The description promises both a wish-off and a Doberman who breathes fire. They had me at Reno 911!, but hey, a wish-off always helps.