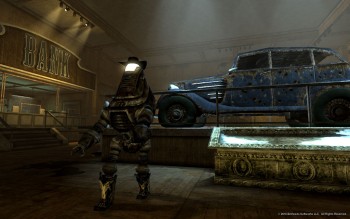 The Writers Guild of America has announced its six picks for the best videogame writing of 2010.

Assassin's Creed: Brotherhood and Fallout: New Vegas top the nominations list for the videogame writing portion of the upcoming Writers Guild of America's 2011 Awards. Previous winners have included the likes of Star Wars: The Force Unleashed and Uncharted 2: Amongst Thieves.

Unfortunately, not every game is eligible for the award, no matter how well written they might be. In order to qualify for this year's awards, the game had to have come out between December 1st 2009 and November 30th 2010, and have a separate writing credit. That writer must also have joined the WGA, or have applied to join, by the time the script was submitted for consideration.

Of course, it's not entirely surprisingly that the WGA isn't tripping over itself to include non-members in its awards ceremony, especially not when it makes no secret of the fact that it hopes to drum up more members from the videogame industry.

Plenty of games do qualify though, and the nominations for the award are:

The awards will actually have two ceremonies: one in Los Angeles for WGA West members, and one in New York for WGA East members. Both ceremonies will take place simultaneously, with the folks in New York presumably in for quite a late night. The ceremonies take place on Saturday, February 5th.