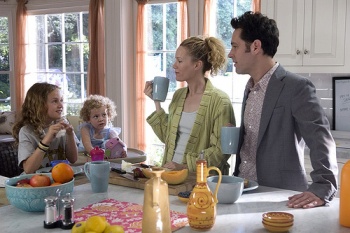 Two supporting characters from the 2007 film Knocked Up are returning to theaters in their own feature film.

Knocked Up introduced audiences to Pete and Debbie, supporting roles played by Paul Rudd and Leslie Mann. Mann's character was the sister of Katherine Heigl's Alison Scott, and Rudd portrayed Mann's fantasy baseball-playing husband. Writer and director Judd Apatow has decided to revisit this couple, making them the focus of a new feature film. Apatow told HitFix he's excited to bring more of this couple to life, saying, "People really responded to their characters and problems. I felt like there was a lot of ground I could explore with them."

The film will certainly be related to Knocked Up, as it focuses on characters and relationships established in that film, but will it be a sequel? A prequel? Apatow told HitFix, "It is neither. It is just a story from Pete and Debbie's current life," and promised to tease out more details as the film nears production.

The as-yet-untitled film marks Apatow's fourth as both writer and director; previously, he scripted and helmed The 40-Year Old Virgin, Knocked Up, and Funny People. The spinoff is set to go into production this July, and will probably be released in June of 2012.