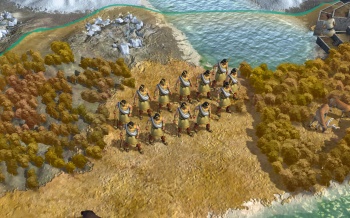 Jon Shafer says he left the comparably huge-budget PC developer Firaxis for the smaller independent shop of Stardock to have freedom.

It was big news for such a young designer as Shafer to be named as the lead on a huge sequel with a pedigree as celebrated as Civilization. It's even more notable that the young designer quit his cushy job at Firaxis mere months after shipping Civ V. Jon Shafer said that he left not because he felt stifled or in the shadow of the great designers in house there, but because he sees more opportunities for PC gamemakers to create great games without spending a fortune. Stardock, where Shafer is now employed, is a privately held company under the sole leadership of CEO Brad Wardell, not the subsidiary of a publicly-traded behemoth like Firaxis is to Take Two. Shafer can feel free to experiment in the "middle market" of PC games, creating rich strategy games with the small focused teams of independent games.

"Nowadays, you might see games that cost $50 million to make, whereas somebody's releasing games on Facebook that are effectively PC games that might have required literally one person to make" Shafer told Gamasutra.

"On the other hand, you have companies that are doing things more like Stardock, where they're pursuing what I like to call a middle-market where they focus on an experience that is really big and in-depth, and really borrows a lot from some of the more traditional models of making PC games. But you're not spending humongous amounts of money."

The interesting part of Stardock is that it has a business software division, and only makes strategy games because of the passion that Wardell has for PC gaming. Not that Wardell is a power-hungry wannabe game designer.

"Every company has different strengths and different weaknesses," Shafer told Gamasutra. "As a designer, it's really unique to work for a company like Stardock, where [CEO] Brad [Wardell] is so dedicated to the games. He very much enjoys working on the games, but he doesn't necessarily want to be the one designing everything himself.

"A lot of times, what you'll see with the smaller, private companies, is the person in charge who's involved with a lot of things also wants to be a designer, and make a lot of decisions for everything in the game. But that's not the case with Brad. It makes Stardock very unique in that sense."

Shafer again stressed that he left Firaxis amicably and bears no ill will towards the company that gave him his shot, but that Stardock made him an offer that he couldn't refuse. "I really enjoyed my time at Firaxis. It was a lot of fun. Definitely working on Civ was an absolutely incredible experience. I got to know a lot of good people, but Stardock, with the opportunity I have here, it's something that's incredibly rare, and maybe even once in a lifetime. So I jumped on it when I had that chance."