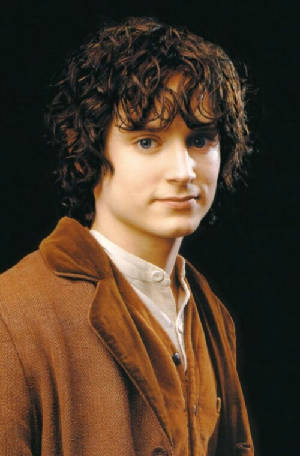 Sources have confirmed that Elijah Wood will reprise his role as Frodo Baggins in Peter Jackson's two-part adaptation of The Hobbit.

Everyone knew that Peter Jackson would take liberties in portraying the comparatively short tale of The Hobbit over two films by borrowing heavily from the immense backstory written by J.R.R. Tolkien. For instance, we know that Cate Blanchett will appear as the elf queen Galadriel despite not being mentioned in Tolkien's prequel to the Lord of the Rings. But The One Ring.net has confirmed that Elijah Wood will also appear in the films, despite the events of The Hobbit occurring nearly 80 years before Frodo takes the Ring to Mordor (and 27 years before Frodo was even born.) How does that work, you might ask? Well, read on only if you don't mind knowing the narrative framework of a work before you consume it. In other words:

The opening sequences of Peter Jackson's The Hobbit will feature Elijah Wood as Frodo reading through his adoptive father's adventures written in the fictional Red Book of Westmarch aka There and Back Again. Remember the big red book that Bilbo is seen writing in the Extended Edition of The Fellowship of the Ring film and that Frodo is later seen recording his story in The Return of the King? That book also contains Bilbo's account of his adventure to the Lonely Mountain with Thorin Oakenshield's band of dwarves and Jackson is using Frodo reading the story as a framing device for the The Hobbit films.

It's an ingenius way to not only draw in fans of the original films but also cater to hardcore fans of Tolkien's Middle Earth. Frodo will be able to experience Bilbo's story, while leaving it open for characters like Gandalf (hopefully played by the as yet unconfirmed Ian McKellen) to drop by and add their insight to the story. For example, with Galadriel, Saruman and Radagast (another Wizard) confirmed to appear in the film, maybe Gandalf will report on attending a meeting of the White Council and the subsequent attack on Dol Guldur just as Bilbo (played by Martin Freeman) and company traverse the forest of Mirkwood.

As an admitted Tolkien fanboy, I quite like the direction that Jackson is taking with The Hobbit portraying so much more of the story of Middle Earth. Here's hoping it lives up to his treatment of the The Lord of the Rings and offers an experience that captures the feel and tone of the original works while limiting any changes in the story to make it more cinematic.

Source: The One Ring