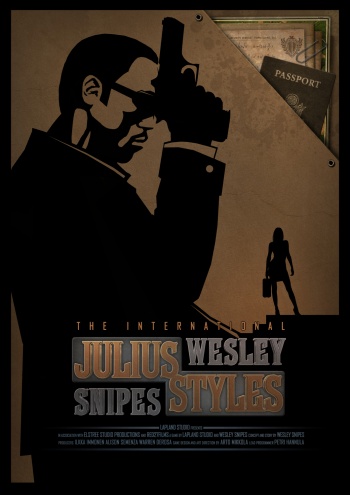 Jail can't stop a true businessman, and one of the businesses Snipes' has chosen to operate from the slammer is the development of a videogame. It might not be as exciting as running a crime empire from the inside, but it's similar. He's enlisted Lapland Studio for the task, which recently finished a title called Lead the Meerkats for WiiWare.

Lapland's collaboration with Snipes is decidedly different than its game about groups of furry mammals. It's called Julius Styles: The International and follows Snipes in the main role as Julius Styles, an international "facilitator" in a world of "money, power, sex and murder." Sounds like a fun world except for that last thing.

Snipes says Styles is inspired by his characters from movies such as Passenger 57 and Art of War. He believes the game will offer something for "both the mind game strategist and the kick-ass special ops warrior lover," and will "expand on the cool, sexy, diverse sometimes scary, and often bizarre world and people I've had the pleasure to spend time with." So it'll apparently be a cool, sexy, diverse, sometimes scary, bizarre, kick-ass, strategic brawler that will require use of both "street knowledge survival skills" and "academic intellect and spiritual intuition." Something tells me either the development team or PR team needs a little more focus.

Also associated with development are Elstree Studio Productions and Red 27 Films. Lapland, the two film-based entities, and Snipes plan to deliver multiple stories in the Julius Styles: The International universe. The action/strategy title's first episode is planned for release in June 2011 as an iOS and Mac App Store exclusive, but will come to Xbox Live Arcade, the PlayStation Network, WiiWare, and Android Marketplace afterward. It'll be priced at one carton of cigarettes on all platforms.