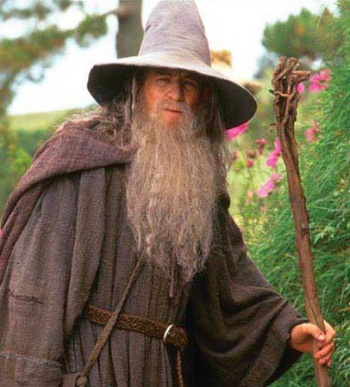 The 72 year-old Ian McKellen almost abandoned his legacy as Gandalf from The Lord of the Rings films before finally deciding to appear in The Hobbit movie.

I know that you were all holding your breath. After we reported that Elijah Wood had signed a contract to reprise his role as Middle-Earth's second favorite hobbit in Jackson's adaptation of Tolkien's prequel to The Lord of the Rings, I'm sure that a few of you were nervous. What about Ian McKellen as Gandalf the Grey? Would the film have the same thematic feel if a different person played the iconic wizard as he guides Bilbo Baggins and his dwarven counterparts to the Misty Mountain? Then there's the little ring junkie himself. Andy Serkis basically patented his motion capture voice acting combo to bring the creeping Gollum to life. Would The Hobbit be the perfect start to the LOTR story if some other dude was behind Gollum's huge CGI eyes?

Well, have no fear. According to the Hollywood Reporter, both Ian McKellen and Andy Serkis will be joining the cast and crew as filming begins next month in New Zealand. But it almost didn't happen.

McKellen wrote on his personal blog that he considered taking the role for a long time, and as Peter Jackson's union troubles and delays in filming mounted, he was concerned that the time commitment was too lengthy. Was it more important for him to be known as Gandalf or for him to play a new and exciting role, perhaps on the stage?

"I kept wondering: was Gandalf what I most wanted to do, more than a new play for instance or indeed a new part? Sequels aren't necessarily as rewarding to act in as their originals," McKellen wrote. He thought about whether his legacy as Gandalf was already secure or if his legacy even mattered at all. "Could I let Gandalf go? Would anyone else care if I did? Elsewhere, does anyone care that Michael Gambon was not the first to play Dumbledore?" McKellen is of course referring to that other great old wizard, and the fact that Gambon inherited the role from Richard Harris after the first actor passed away following the second Harry Potter film.

Eventually, McKellen made the decision based on Jackson's filming schedule being flexible. "The deciding negotiation was not about money but about dates. Gandalf is needed on set over the next 18 months but with sizeable breaks when I can work on other projects. My worry that I could not easily escape from Middle Earth was lifted," he wrote. "I am happy to say I start filming in Wellington on February 21 2011."

Peter Jackson seems very willing to realign his schedule to accomodate the actors that he needs, as he had to do the same for Martin Freeman so that the Englishman playing Bilbo Baggins could return to the BBC for his commitment on Sherlock.

As for Andy Serkis, it appears that his work on Ninja Theory's game Enslaved is over and that he is able to fly out to New Zealand for enough time to shoot the small but pivotal scene featuring Gollum in the The Hobbit. Riddle in the dark, anyone?

With Cate Blanchett and Orlando Bloom on board to play roles that aren't technically in The Hobbit, all that's left is for Hugo Weaving to sign on as Elrond and I think the film will be complete. I'd also love to see Christopher Lee reprise his role as Saruman the White, but that might just be wishful thinking as the 88 year old actor is far too busy working on his burgeoning career as a heavy metal singer.