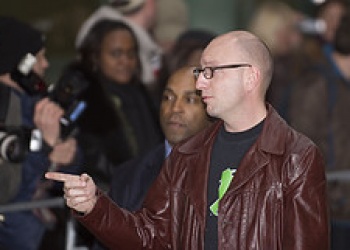 The Academy Award-winning filmmaker discussed his approaching retirement on, of all things, an NFL podcast.

Director, writer, and producer Steven Soderbergh was a guest on The Rich Eisen Podcast (available here), and after rating pre- and post-game NFL shows, Eisen and Soderbergh discussed the latter's career. Soderbergh confirmed rumors of his impending retirement, saying that the upcoming Liberace is likely his last film. (If you're listening, the interview starts a little over halfway into the podcast, and the relevant discussion starts near the very end.)

Eisen asks Soderbergh about the veracity of Matt Damon's recent statement, that the director was getting ready to retire. Soderbergh notes that he and Damon "were both pretty drunk when we had that conversation... yeah, I'm going to wind it down, and I'm making the announcement now, so that... all these various organizations can line up these lifetime achievement things, so I can kind of do it all at the same time." When pressed, he more succinctly notes, "I have an exit strategy."

Soderbergh did acknowledge that, following Liberace, he'd like to fit in one more project with frequent collaborator George Clooney, adapting the 1960s television series The Man From U.N.C.L.E., but that "you can never assume anything, in this business."

His directing credits include Erin Brockovich (for which he was nominated for an Oscar), Traffic (for which he won the Oscar), Ocean's Eleven, Twelve, and Thirteen, Solaris, and Sex, Lies, and Videotape, and he has served as executive producer on such films as Pleasantville, Good Night, and Good Luck, A Scanner Darkly, and I'm Not There. Soderbergh's remaining upcoming films include Haywire, Contagion, and the afore-mentioned Liberace.