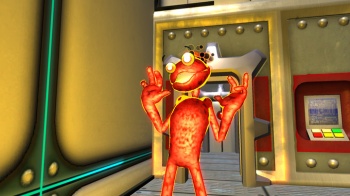 Capcom's MaXplosion is a little too close to Twisted Pixel's 'Splosion Man for comfort.

Many gamers took notice of Twisted Pixel's 'Splosion Man when it was released on Xbox Live Arcade in July 2009 as a fun platformer with a unique take on moving the main character around (hint: explosions). Twisted Pixel is somewhat miffed about a new iOS game recently released by Capcom Mobile called MaXplosion that appears to be a major rip-off.

For comparison, here's a video of a 'Splosion Man level, followed by one for MaXplosion:

On Twitter, Twisted Pixel programmer Mike Henry wrote that he's "definitely pissed off." He continues: "There's a right way and a wrong way to go about being "inspired by" another game. Borrowing is great. Hell, we do it all the time. But that game is a complete theft."

Twisted Pixel CEO and co-founder Michael Wilford makes Capcom look even worse. "Best part is, we originally pitched 'Splosion Man to Capcom and they said no," he tweeted. Ouch.

Granted, MaXplosion is a mobile game, and there are enough mobile clones available to circle the universe three times, but 'Splosion Man's key mechanic is very specific. To me, Capcom releasing MaXplosion is like a major publisher creating a game called Super Jumpio Bros.

Twisted Pixel is a much smaller outfit than Nintendo, so maybe Capcom thought they could sneak one by. Parallel thinking is entirely possible, it's just not very likely in light of Wilford's reveal. Twisted Pixel recently announced the future release of 'Splosion Man sequel Ms. 'Splosion Man, so if we eventually see a female MaXplosion we'll know for sure that Capcom has lost its scruples.