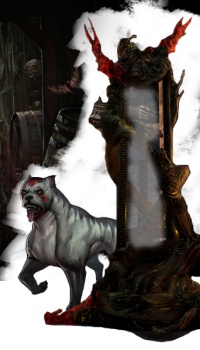 The Dragon Age 2 preorder saga continues as BioWare and Electronic Arts have come up with yet another bonus for those who missed the last one as well as a little something extra to keep people away from used copies.

Have you got your Dragon Age 2 preorder in yet? Those who put some money on the game before January 11 will be automatically upgraded to the "Signature Edition" of the game, which includes among other things The Exiled Prince, a Stone Prisoner-style add-on revealed last week as the game's first DLC. It's too late now to take advantage of that deal but EA has come up with another opportunity for people who just can't wait to throw money at the game to score some free loot.

Customers who preorder anytime prior to the game's release will receive the Lion of Orlais shield, a legendary shield with two rune slots that adds a bonus to health and experience; the Fadeshear sword, an ancient blade that does extra damage to demons and undead and becomes more powerful as players level up; and The Black Emporium, a store that offers some of the most powerful equipment in the game, including a Mabari war hound that will join you in battle, the Mirror of Transformation and other unique, mysterious artifacts.

Don't want to preorder? You can still pick up a little extra just by staying away from the preowned section of the store, as all brand-new copies of Dragon Age 2 will come with The Black Emporium. And no worries if you preordered the game prior to January 11 and were automatically upgraded to the Signature Edition, because you'll get all of this stuff too. For those who miss the boat completely, The Exiled Prince will be available for separate purchase for 560 Microsoft points - about seven bucks - but there's no indication that the second-stage preorder stuff will be on offer.

Can you keep all that straight? Head over to dragonage.bioware.com if you need a little help making sense of it all. Dragon Age 2 comes out on March 8 for the PC, Xbox 360 and PlayStation 3.