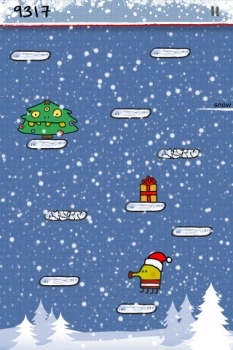 Another App Store-centered battle over trademarks may be brewing as Doodle Jump studio Lima Sky is apparently demanding that other developers rename their "Doodle"-named games or face legal action.

Indie developer Robots vs. Wizards reported on the Touch Arcade forums yesterday that a full year after the release of its Doodle Monster game for the iPhone, iPod and and iPad, it had received a notice demanding that it change the name of the game because it is in violation of Lima Sky's copyright on Doodle Jump. The studio initially said it would comply because it couldn't afford the cost of a legal battle, but changed its mind when it discovered that another studio was also being targeted.

That second studio, Acceleroto, received a similar notice regarding its game Doodle Hockey but had no intention of being so accommodating about it. In his own Touch Arcade post, Acceleroto's Bryan Duke wrote that Igor Pusenjak of Lima Sky is "flexing a muscle that he doesn't have."

Citing several limiting aspects of the Doodle Jump trademark, Duke concluded, "It's my impression that Igor is starting to chase out the 'small guys' first. The big houses aren't afraid of him. One of them even used the word 'absurd' to describe what he's doing. It's easy for someone to scare 'small guys' out of business with legal threats. It's my guess that Lima Sky's intent here is to get as much momentum as they can with hopes of kicking all of the doodle-named apps out of the App Store."

"Every lawyer I've spoken with thinks Igor doesn't have a leg to stand on here," he added. "There are piles & piles of examples of trademarks like this coexisting. (I know you guys have heard of Star Wars and Star Trek, right?)"

For his part, Pusenjak told PocketGamer that Lima Sky isn't claiming ownership of a trademark on "doodle," although he neglected to explain what exactly the studio is trying to accomplish. He also added rather cryptically, "More to come."

One of the biggest problems facing indie developers accused of infringing on copyrights is that Apple can pull any game from the App Store at its discretion, effectively cutting off developers from their audience. "We can't really debate it. In the Apple world they can pull your app just from mere implication," Robots vs. Wizards wrote. "There is no proving you are right or wrong. Apple can simply remove an app based on Lima Sky's implication."

The whole matter at this point has echoes of Tim Langdell's long-running battles over his "Edge" trademark, which finally ground to a halt late last year. But it was Langdell's effort to bring down another App Store game, Edge by Mobigame, that resulted in his ultimate and spectacular fall. He lost his trademarks, his IGDA membership and any credibility he may have had in the videogame industry. I'm inclined to see that as the sort of unappetizing outcome that would dissuade actions like this, but maybe Lima Sky really does have a legitimate ace up its sleeve.

According to GamesIndustry, more than 730 apps with "doodle" in their titles have been approved by Apple.

Change We Can Believe In Matthew Sakey 9 Comments
Comments on