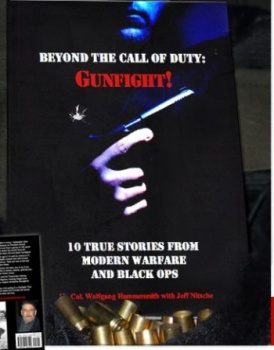 It looks like the "real life black ops guy" who dazzled gamers with his true stories about modern warfare and black ops in the book Beyond the Call of Duty: Gunfight! is actually a fraud who's never even been in the military.

Back in November we told you about Wolfgang Hammersmith, the improbably-named former Marine Corps Lt. Col. and black ops veteran who led 86 combat missions in 41 countries and lived to write about it in Beyond the Call of Duty: Gunfight! Hammersmith's life was hardcore military from the get-go: his father fired live rounds at him when he was eight years old "to desensitize him" and then turned him over to a United States Marine Corps program when he was 12. At age 18 he became a "combat team commander" in Vietnam, took part in counter-terrorism and anti-human trafficking operations as part of the pre-Delta Force "Combined Services" and finally threw in the towel and retired to civilian life at 37.

It sounds impressive. There's just one problem: according to some digging done by members of Professional Soldiers, it's all a lie.

A number of inconsistent details in Hammersmith's fantastic tale raised red flags among many members of the community, who were unable to locate any evidence that could corroborate any aspect of his story. Hammersmith himself appeared on the forum in early December to mount a defense, although that amounted to little more than a statement that his ops were so black that they were utterly invisible. He further claimed that he was attempting to access his records through a Freedom of Information Act request, although he said he did not expect it to be approved.

That didn't carry much weight with the Professional Soldier users, who have apparently run into such far-fetched stories in the past. One long-time member sought more information by submitting his own FOIA request to the National Personnel Records Center, which eventually reported that Hammersmith had never been in the military at all.

True believers might dismiss that as a simple disavowal of an ultra-secret operative, but Hammersmith's own actions in the wake of the controversy tell a different story. On December 23, he modified his website to reflect an "update in progress," saying that he had met with attorneys in Washington D.C. and launched an investigation to uncover his official status in the Marine Corps. He removed all links to his biography and other related information, and made a few significant changes to his book as well.

"Based on legal counsel's advice, I am voluntarily removing my rank from my book Beyond the Call of Duty: Gunfight! until such time that my military status can be made public through the ongoing investigation I am conducting," he wrote. "Additionally, I am moving the genre of my writing into fiction instead of non-fiction."

Now I'm no special ops guy, nor do I know any in real life, but it seems to me that if Hammersmith's ops were declassified as he claimed, and that if he could write about them in a book that's for sale to the public, then he should be able to provide some shred of evidence to support his claims. Instead, he's thrown up some wild obfuscation, reclassified his book as fiction and effectively disappeared. It may not be proof of wrongdoing, but it sure doesn't look good.

For those who want to see more, the whole ugly business is on display now at professionalsoldiers.com.

Science and Tech Features: Review: What If? Answers All Your (Literally) Burning Questions MarlaDesat 1 Comment
Comments on