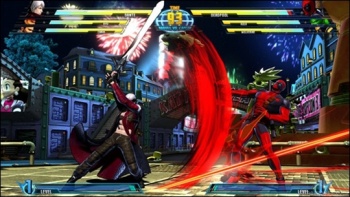 If you quit matches often enough in Marvel vs. Capcom 3, it won't be long before your only opponents are other quitters.

Capcom has come up with what is possibly the ideal solution for rage quitters in Marvel vs. Capcom 3. Rather than let them hop from game to game, disappearing like cowardly ninjas if it looks like they're going to lose, Capcom will simply isolate them, so that they don't spoil anyone else's fun.

The game will monitor player's connection habits, and if it notices that a particular player frequently pulls out of matches at the last minute, it will start to mark him or her down for it. These black marks will affect whom the game pairs you up with online, so if a player persists with his or her vanishing act, eventually the only people left for him or her to fight will be people with a similar fondness for quitting matches.

Capcom used a similar system in the Wii game Tatsunoko vs. Capcom, and while there were some complaints about it in that game, it's likely that the experience will have helped Capcom to refine its approach. Presumably, this system will only affect habitual quitters, as it seems pretty unlikely that Capcom is going to banish someone to the hell of rage quitters just because their internet connection is a little flaky.

Hopefully, it will also allow players to earn back some trust through good behavior, because after playing against nothing but rage quitters for a prolonged length of time, at least some of them will learn their lesson.