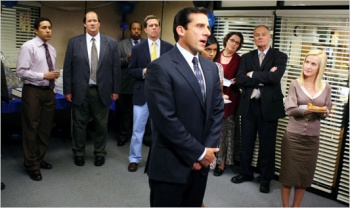 The actor will be departing the NBC sitcom four episodes prior to the end of the season, leaving his management position up for grabs.

By this point, most fans of The Office know this is Steve Carell's last season as bumbling boss Michael Scott. HitFix's Alan Sepinwall caught up with showrunner Paul Lieberstein (who also played Toby on The Office) and got a rundown of how Carell's departure will work. The biggest news is that Carell will not see through to the end of this year, but will rather bow out with four episodes left in the season.

In the world of the show, Michael Scott's role as regional manager will not be filled until after his departure, leading to a scramble to fill the managerial void. The show's executive producers are considering three "internal" candidates: Andy (Ed Helms), Darryl (Craig Robinson), and Dwight (Rainn Wilson). External candidates will also be up for the position, but Lieberstein specified neither actors nor roles when discussing this development.

Lieberstein also noted that the new regional manager will not be the new star of The Office, rather, the program will move forward as an ensemble comedy. Two familiar faces will be returning soon, as Michael's ex Holly (Amy Ryan) will make her final appearance this season, and his "BFF" Todd Packer (David Koechner) will likely return in the upcoming eighth, although he won't prove as entertaining without Michael there to worship him.

Critical Miss: Lord of the Wrongs The Wooster 150 Comments