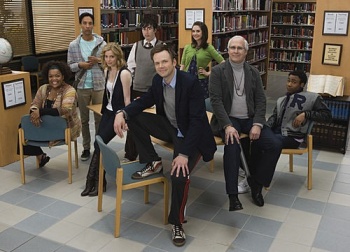 The ensemble of NBC sitcom Community are going to toss some dice playing Dungeons & Dragons over the course of an upcoming episode.

Community has quietly become one of the most innovative situational comedies on American television. The show follows Joel McHale playing a disbarred lawyer who's forced to re-enroll in college where he befriends several characters there including Pierce Hawthorne played by elder comedian Chevy Chase. Show creator Dan Harmon continues to take risks that transcend the normal one camera sitcom formula. This Christmas, the show featured an entire episode in claymation as an homage to the old specials like Rudolph the Red Nosed Reindeer. But Harmon's geekiest departure may be an upcoming episode centered on the group of community college students playing a session of Dungeons & Dragons and might be the first time in a while that mainstream television doesn't just retread the gaming stereotype.

"They'll just be sitting at a table playing," Dan Harmon said. "But there are [style choices] that will make it really interesting."

I can only imagine that given the show's reputation we'll get images of the character's, um, characters as they fight monsters and gather loot.

This won't be the first time that a major network show featured its cast playing the classic tabletop role-playing game. The last aired episode of Judd Apatow's Freaks and Geeks showed Daniel Desario played by James Franco enjoy a particularly memorable session as Carlos the Dwarf.

And one cast member of Community is pretty familiar with role playing as he appeared in the comedy film Role Models as the LARP King Argotron. Ken Jeong plays an unhinged ex-Spanish teacher named Señor Ben Chang in Community and I can't wait to see what kind of character he rolls in the D&D-themed episode.