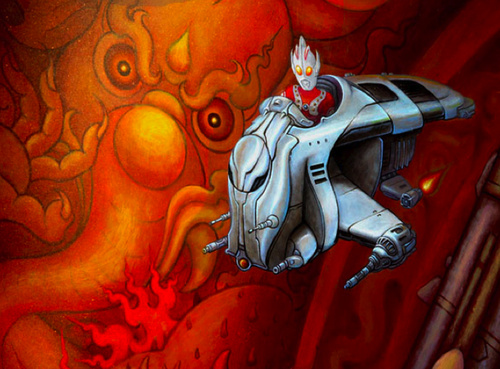 These images of characters like Superman and Ultraman are literally religious experiences.

The Wat Rong Khun Buddhist temple in Chiang Rai, Thailand, is quite possibly one of the strangest and prettiest holy sites you'll ever see. The complex was designed by Chalermchai Kositpipat, a nationally-honored Thai artist; construction began in 1997 and it's expected that another 100 years of construction will be needed before the temple is completed. However, while the exterior design is stunning, it's the interior artwork - which features various pop-culture icons like Superman, Ultraman, Keanu Reeves (in his Matrix garb), and a Transformer - that really stands out to visitors.

According to Brent Lambert of FEELGuide:

All of the paintings inside the ubosot (assembly hall) have golden tones. The four walls, ceiling and floor contain paintings showing an escape from the defilements of temptation to reach a celestial "all seeing" state [...] Undoubtedly the most bizarre element of the design is the presence of contemporary images throughout the interior. Images of the Predator from the Schwarzenegger film franchise, Spiderman, Batman, Superman, Avatar, Keanu Reeves' character in the Matrix, rocket ships, and others line the walls.

Here are some more photos from Wat Rong Khun. And for more Buddhist science fiction art, check out Tibetan artist Gade's paintings of Spider-Man, the Hulk, and others.

The paintings are the work of a Tibetan artist known as "Gade." His work, which often mixes things like comic book characters and traditional Tibetan art, is created "to showcase the totemic status of superheroes and the effects of globalization on Tibetan culture."

Based on the photos that io9 has on display, Wat Rong Khun looks like it could easily become a Mecca for artists around the world, regardless of their religious preferences. Aside from these paintings, the sculpture adorning the buildings' exteriors is amazingly detailed, and the "sea of hands" that surrounds the bridge to the temple is simply otherworldly.