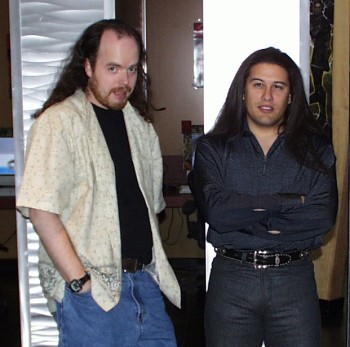 For most of us, the names John Romero and Tom Hall inspire hellish visions of rampaging demons, heavy weaponry and copious amounts of blood and gore. For good reason; as two of the four co-founders of id Software, the pair were key players in the blood-soaked FPS revolution heralded by games like Doom and Quake. But those days are long gone and they now appear interested in making a splash in an entirely different emerging videogame market: that of the social.

Loot Drop will be focused on the development of social games on Facebook and has already signed a deal with publisher RockYou, which is turning back to the social game space after spending last year dedicated solely to its ad network business. RockYou will publish, promote and maintain the game.

Romero and Hall have a long history together, beginning at id and running through Ion Storm, Monkeystone Games and Midway. But that doesn't explain why two pioneers of the guns-n-guts school of gaming are so determined to make some noise in the casual-social arena.

"I really like the faster cycles where you can respond a lot faster to the users," Romero told VentureBeat. "We are not interested at all in going back to the normal game industry cycle where it takes years to do a game. This audience is unbelievably massive, and we are very early in its history. I feel like it is 1981 again, and the industry is ready for an explosion of creativity."

Details about what Loot Drop is working on for RockYou or when it will be ready weren't revealed.