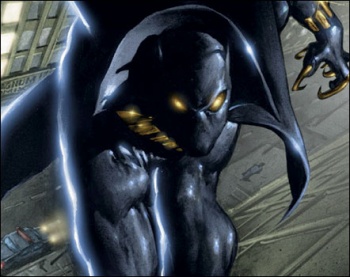 Marvel Studio has hired a screenwriter, which means T'Challa may finally be coming to a movie theater near you.

Documentary filmmaker Mark Bailey penned the television mini-series Pandemic: Facing AIDS and served as editor on documentaries such as A Boy's Life and Ghosts of Abu Ghraib. Now Marvel Studios has decided he's the one to bring Black Panther to the silver screen. The Hollywood Reporter believes that Bailey, whose next project is an adaptation of the non-fiction The Last of the Tribe: The Epic Quest to Save a Lone Man in the Amazon, "brings realism and grittiness to the project."

This won't be the first time a studio has tried to get a Black Panther project off the ground. In the 1990s, Wesley Snipes was on board to star as Black Panther in what The Hollywood Reporter calls "an Indiana Jones-style adventure." The property has been bounced around since then, jumping from Columbia Pictures (The Fifth Element) to Artisan Entertainment (Requiem for a Dream) to Lionsgate (the Saw series). Then Lionsgate purchased Artisan, then Marvel re-acquired the character license from Lionsgate. Snipes stuck with the project through its Artisan days, then dropped out.

As Marvel has just selected a writer, the film won't hit theaters for a couple years at least. Marvel, when you get to the casting stage, call up Djimon Hounsou. He's waiting patiently.