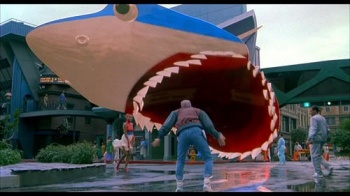 It turns out that Roger Ebert's arguments against 3D movies might not be scientifically sound.

Oh, Roger Ebert, you adorably outspoken thing, you. Hot on the heels of Ebert's journal post citing science proves our brains can't handle 3D, a counter-argument (also based on science) has now popped up. If the argument's to be believed, the science behind Ebert's claims isn't all that accurate.

Slate's Science Editor Dan Engber basically picks apart the arguments with enthusiasm. Aside from pointing out the bad science involved with Ebert's argument, Engber also points out that the aging film critic has been on a decades-long crusade against 3D movies. But it's the scientific arguments that are quite interesting.

According to Ebert, the 3-D effect brings in an "artificial" third dimension, which doesn't serve to make a movie any more realistic. In fact, he says, it makes an image seem less real, since under normal circumstances "we do not perceive parts of our vision dislodging themselves from the rest and leaping at us." Here he appears to be confusing cheesy, pop-out effects (which are used judiciously in the better-and more recent-films) with the medium as a whole. Yes, some 3-D movies do contain these gimmicks, but others do not.

In any case, it's not clear to me why one depth cue might be deemed artificial and unnecessary, while others are just fine. After all, a regular old 2-D movie carries its own set of visual guidelines for understanding spatial relationships. Objects in the foreground block our vision of what's behind them. Shading and texture tell us about the three-dimensional shape of an object on the screen. Ebert would certainly agree that you don't need to watch the famous sequence from Dial M for Murder in its original 3-D to understand that Anthony Dawson is creeping up behind Grace Kelly, and that he's going to lift a stocking over her head to strangle her. Yet he's apoplectic over the thought of adding one more depth cue into the mix.

With 3-D cinema, we still have occlusion and shading and texture-and we're still missing motion parallax-but now we get the added benefit of binocular disparity. We don't need that extra information to see that Grace Kelly's killer is lurking behind her, but it adds, at the very least, clarity and precision to the scene. Exactly what part of that is "artificial"? As it happens, the 3-D version of Dial M also gives us something more: When Kelly falls across the desk, her hand reaches through the stereo window, as if imploring the audience for help. It doesn't make us jump out of the way like Ebert's Homo habilis. It draws us into the action.

Engber's arguments make for fascinating reading, and they do an excellent job of shredding Ebert's arguments. That said, Engber doesn't say that 3D filmmaking is always for the best, and even acknowledges how many filmmakers use the technique as a gimmick. Personally, I plan to continue loathing 3D movies due to the inflated ticket prices and dim colors, but at least I don't have to worry about my brain not being able to process the style.