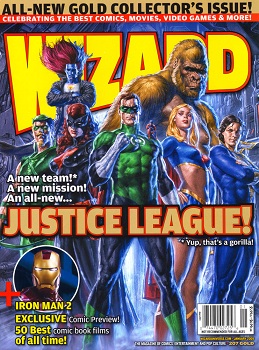 Wizard Magazine, one of the leading publications on comics and comic-related news, is ditching its physical format to become an online magazine.

Wizard Magazine, that ever-flowing font of comics reviews and industry news, is getting the axe after nearly 20 years in print.

In a press release, founder and CEO of Wizard Entertainment, Gareb Shamus, announced that both Wizard Magazine and its partner publication Toyfare Magazine will be shut down. They will be replaced with an online publication, Wizard World.

Shamus believes that this is a step forward for the magazine. "This is a very exciting day for Wizard World and the industries it serves," he said. "The new digital magazine Wizard World will give consumers the content they want in a magazine format with which they are familiar, but distributed in a form that is always available at any time on any device. It is a natural evolution for us in this market."

I, for one, look forward to reading the first edition of Wizard World, which has been slated for publication some time in February.