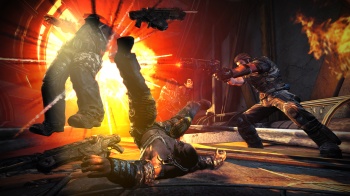 Destructoid recently dug up something interesting on EA's PC games disclosures website, an exciting online hotspot where you can read "EULAs and other disclosures" for the publisher's current and future game releases. According to the first line of disclosure for the digital versions of Bulletstorm, "Persistent internet connection and acceptance of end user license agreement required to play." It all sounds very Ubisoft and, as you might guess, didn't go over well with gamers.

Fortunately, Chmielarz quickly leaped into the fray with a strong denial. "F*cking Internets... No, Bulletstorm PC does not require any constant connection, only for install and for online play (duh!)," he wrote on Twitter a few hours after the Destructoid report.

"BTW, Internets," he added in a second tweet a bit later, presumably after he had the chance to cool down. "You had the right and reason to be worried. I was just all emo because once you explode, the fire's hard to contain."

EA hasn't yet released an official statement clearing up the matter but as Blue's pointed out, the Bulletstorm EULA (PDF format) makes no reference to a persistent connection, saying only that the game is protected by "Zero Day Piracy Protection" and "Server Side Authentication," both of which require a one-time net connection to enter and authenticate the serial code.

"We're investigating wtf happened," Chmielarz said. "Persons responsible will be set on fire and shot in the balls for extra points."

Bulletstorm comes out on February 22 for the PC, PlayStation 3 and Xbox 360.