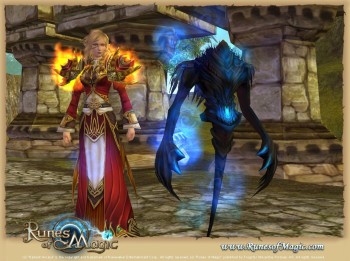 The hacker who tried to blackmail Frogster Interactive last month has done his cause more harm than good as the company is working to secure itself against future attacks instead of working on Runes of Magic.

Some people, when they feel they're being poorly treated by a business, send an angry letter to the customer service department. Other people hack said business, download reams of private user information and then threaten to make it all public unless the business promises to clean up its act. One person does, anyway, a hacker by the name of "Cpt.Z3r0" who said he'd release 1000 email addresses and other login details belonging to Runes of Magic players every day unless Frogster met his demands: ease up on forum moderation, be more honest with its customers, secure the game against cheaters, stop monitoring the internet usage of its employees and, hilariously, take better care of its customers' private information.

But Frogster is having none of it. Chief Operating Officer Dirk Weyel expressed frustration with the whole mess but told GamesIndustry that the company won't cave in to extortion. "It's very frustrating for the team, in the first place, to see that a guy can hack accounts, claim things, influence public opinion and harm the users," he said. "Our team has to focus and work on making the system more secure, on managing the whole incident. It means that they can't work on their regular goals and targets, like making events for the game, or improving it in other ways."

"Of course, we looked at what it means. Why is someone so angry? Why do they want to harm Frogster and the user base?" he continued. "Obviously, in any community you have people who complain. Some of them are reasonable, and some complain in a way that is unacceptable. What this guy did is definitely criminal, but is also unacceptable in terms of the way that he communicated."

The tricky bit with this kind of extortion is that it's difficult to be seen as not giving in to a blackmailer's demands when he's demanding that you do what you want to be doing anyway. Improving customer relations and securing the game against cheaters and hackers is a desirable goal under any circumstances and Weyel said Frogster would continue trying to improve its relationship with the Runes of Magic community even as it pursued action against the hacker.

"I'm not saying that our community management is perfect, or that they always do the right thing, but we know that our community is our most important asset, so we always try to be as open and transparent as possible," he said. "So we can try and keep continuously improving in that area, but we can't accept people hacking and threatening us."

An investigation into the Frogster hack and blackmail is ongoing.