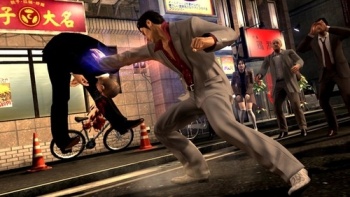 Yakuza 4's total cutscene length is going to be nearly four times longer than that of Dragon Age II.

Sega's upcoming Yakuza 4 is set to feature some major action. But it's been revealed that the game will also feature over six hours of cutscenes to watch.

The game will feature a total of 384 minutes of cutscenes, which is almost four times as much as Dragon Age II is set to include. This information came to light via Britain's game-ratings group, the BBFC. The group assigned an "18" rating to the game. The game received the ranking because of "strong bloody violence and strong language."

Yakuza 4 is due out in North America in March. Sega has promised the game will be largely unchanged from its Japanese release, which is promising because - based on reviews of imported copies of the game - the game is supposed to be a lot of fun. Still, six hours is a lot of time to spend watching cutscenes ...