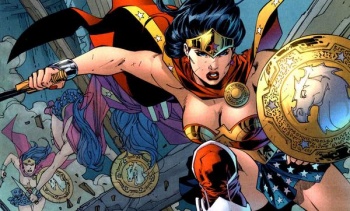 Not only will she fight crime, but she'll sing along to the radio and have ice cream sleepovers.

Sometimes, something gets lost in comic characters' translation to the big (or small) screen. For Wonder Woman, who is getting a new television incarnation courtesy of David E. Kelly, it sounds like the upcoming pilot might run the risk of alienating comic fans in an effort to update the heroine's mass-appeal.

Bleeding Cool has managed to get ahold of pilot episode's script and has a detailed breakdown on how Kelly has changed Wonder Woman to be more 2011-friendly. The summary isn't exactly a ringing endorsement: "It's a slightly goofy comedy-drama about a hotshot business woman who moonlights as a superheroine, packed with Girl Power pop-songs and including the awkward phrase You go, girl."

Now, before we get into what's different from the comics, here's what's coming over from (or at least will be based on) the source material:

• There's a Myndi Mayer, herein portrayed as Diana's BFF.
• There's a scene with comics character Etta Candy, a role that's pretty much written like a job offer to Melissa McCarthy.
• Long ago, government man Steve Trevor crashed onto Wonder Woman's island and brought her back to New York, but now they've split up. She still loves him, though, and it's obvious that their relationship is going to be a focus.
• Diana might not have an invisible jet (if she did, I didn't see it) but she has a whole rainbow's worth of over coloured aircraft.
• She has the lasso, and those bracelets with which she deflects bullets.
• Her nemesis is Veronica Cale, who in this continuity is an evil scientist and rival businesswoman with a secret, nefarious plan that you'll probably guess ahead of time.

Now, there's a bit that's different, too. Instead of just carrying on a masquerade as Diana Prince, the heroine will also have another secret identity. While Diana Prince is a mousy Clark Kent-like character (complete with tied up hair, glasses, and reduced makeup), Wonder Woman also adopts the role of Diana Themyscyra, "the head of Themyscyra Industries."

This second secret identity sounds like it'll be a cross between Bruce Wayne and Tony Stark; while the identity doesn't sound as carefree as Stark, it seems to be common knowledge that Themyscyra is Wonder Woman.

According to the script analysis, Wonder Woman apparently identifies with E.T. the Extra Terrestrial when she sees his movie on TV. She spends a lot of time "pining" for Steve Trevor ("like Carrie for Big") and has multiple scenes where she sings along to the radio the front of her mirror with a hairbrush. She also puts on her PJs and invites Myndi over for "an ice-cream filled sleepover."

Finally, the script features a lot of pop music. Apparently the show will feature a crime-fighting scene that will be set to Beyonce's "All The Single Ladies." Other pop songs listed include the following: "One Way or Another" by Blondie, "Wonder of You" by Jeffrey McDonald, "Golddigger" by Kanye West, "Bad Romance" by Lady Gaga, "Last of the American Girls" and "Extraordinary Girl" by Green Day, "Pepinot" by Les Choristes, and "I Only Know How to Love" by Christina Aguilera.

I'm normally a fan of David E. Kelly's shows, but I'm not entirely sold on this yet. Based on the initial description, the show sounds kinda unremarkable and a possibly cringe-inducing. After reading through the summary, I can't say I'm all that surprised a ton of networks passed on the pilot. However, pilot episodes are often the worst in a series, and this is just a script, so it's hard to pass judgment on the show as of yet.