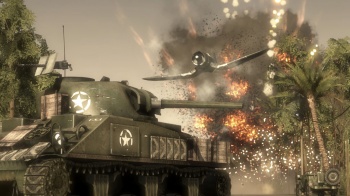 The Battlefield developer says that it has decided to focus on the games of the future, rather than those of the past.

DICE has officially announced that the PC version of the downloadable game Battlefield 1943 and the Onslaught multiplayer mode for Battlefield: Bad Company 2 have been cancelled. This ends a prolonged wait for BF1943 on the PC, which had lasted for a year and a half.

In a statement in the official Battlefield website, DICE's general manager Karl Magnus Troedsson said that the studio was as dedicated to supporting its existing games as it was to making new ones. Sadly, he said, it wasn't always possible to do both, and sometimes, the studio had to chose what its priorities were. He said that the studio had decided to focus its efforts on making Battlefield 3 as good as possible, and that meant cancelling BF1943 and BC2 Onslaught for the PC.

It's safe to assume that most PC players had worked out that they wouldn't be playing BF1943 or BC2 Onslaught unless they also had a console. All the same, it's nice to have it made official, even if just for closure. Hopefully, the PC version of Battlefield 3 - whenever it comes out - will make up for the platform missing out on other Battlefield content.