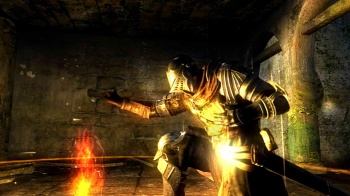 The director of Dark Souls has detailed why the game will be easier to get into than Demon's Souls, but still soul-crushingly difficult.

An in-depth interview with Dark Souls director Hidetaka Miyazaki has revealed how the spiritual sequel to hit action-RPG Demon's Souls will be similar, but very different at the same time. It appears that From Software is taking the basic concepts of Demon's Souls and removing some of the learning curve, while also making the game more challenging (if that's possible).

Yes, Dark Souls will supposedly be tougher than Demon's Souls, but Miyazaki says this is because From wants the game to be "spicy." An increased difficulty will give players "the freedom to strategize freely and conquer that difficulty, and to be rewarded accordingly," he says. A key design philosophy for the game is that button mashers won't succeed, but strategic thinking will. From wants the game to have an aftertaste, but not a nasty one.

Part of the game's strategy will involve Dark Souls' new weapon system, which will make different weapons more unique even within the same category. Not only will there be more weapons than Demon's Souls, but they'll all handle differently. For example, players might hang onto their Long Sword after picking up a Holy Sword simply because it's easier to use. Miyazaki wants an "emotional and physical attachment" to be formed between weapon and wielder.

Miyazaki is also designing a wider variety of enemies, which range from "hideous to strong." He reveals that high-level enemies will still be "pretty disgusting." However, no matter how gross, Miyazaki finds all of his creations "beautiful." He might be looking into the darkness a little too much.

Mastering combat and defeating these beautiful/disgusting beasts may be a bit easier in Dark Souls, as Miyazaki divulges that From is adding a tutorial to get players past the game's "first step." In my experience, the toughest part of Demon's Souls was grokking the experience in the beginning, which may have turned off some players that didn't want to stick with it. The tutorial will hopefully change that, but Miyazaki says that the tutorial won't lessen Dark Souls' difficulty because "there is a lot more that players must learn in order to conquer the challenges."

Something else that even the most hardcore might like are Dark Souls' new Beacon Fires. Miyazaki calls them a "place of warmth" within the game's "cold, dark world." They'll serve as a respawn point, and a place where players can replenish their health. In addition, the Beacon Fire will allow those sitting around it to share their experiences through "emotional communication." If anybody wants to hang out, make some BBQ, and skip the whole fighting giant rats and armored rhinos thing, you know where I'll be.