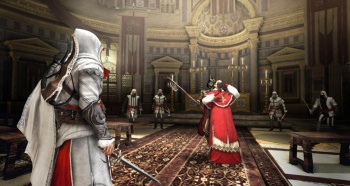 The big winner of the Videogame Writing Award at the 2011 Writers Guild of America Awards has been chosen, and his name is Ezio.

The mysterious ways of the Writers Guild of America and its nomination process for videogame writing awards were in the headlines recently as Micah Wright, the chairman of the WGA Videogame Writers Guild, stirred up a wee bit of a hornet's nest as he explained why some games were nominated for an award while others weren't. Particularly noteworthy in the "not nominated" category were BioWare's Mass Effect 2 and Red Dead Redemption from Rockstar, both of which seemed like obvious choices and yet neither of which were even in the running.

But largely forgotten in the tempestuous teapot were the games that did make the list: Assassin's Creed: Brotherhood, Fallout: New Vegas, God of War 3, Prince of Persia: The Forgotten Sands, Singularity and Star Wars: The Force Unleashed 2. The WGA Awards were handed out on Saturday night, February 5, and the big winner was chosen as Assassin's Creed: Brotherhood. Credit for the game's story went to Patrice Desilets, Jeffrey Yohalem and Corey May, while Yohalem got the nod as lead script writer while Ethan Petty, Nicholas Grimwood and Matt Turner were named as script writers.

As Wright explained, the nomination process requires that entrants must be members of the Videogame Writers Caucus, which costs $60 annually, and that nominated games have at least one credited writer. Both Mass Effect 2 and Red Dead Redemption likely would have been finalists for the award, he said, but neither BioWare nor Rockstar bothered to put them up for consideration.