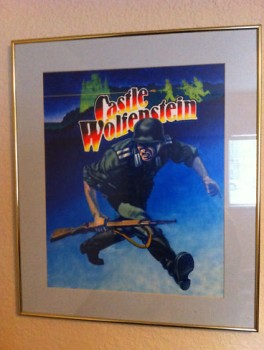 The original painting used as the cover image of the 1981 Apple II game Castle Wolfenstein is now up for auction on eBay. (And it ain't cheap.)

Some of you young whippersnappers out there might think that Wolfenstein originated in the early days of id Software as a precursor to the FPS revolution it would usher in with Doom. Well, you're wrong! The original Castle Wolfenstein was released in 1981 for the Apple II and later ported to DOS, the Atari 400/800 series and the Commodore 64. Aside from the basic premise of escaping a Nazi prison, the two games have almost nothing in common; Castle Wolfenstein was a top-down game in which stealth, not shooting, was the priority.

But that's neither here nor there. What we're interested in at the moment is that the original painting used as the Castle Wolfenstein box art is now for sale on eBay. It's not a print or a copy, but the real, one-of-a-kind deal created by John D. Benson, so as you might imagine, it won't be cheap to bring this thing home. At the time of writing, more than five days remained in the auction and bidding had already hit $300.

It's not Andrew Wyeth territory, but you can buy an awful lot of DLC for 300 smackers - and you can be sure it's going to go a lot higher than that before the auction is over. But if you've got some bucks, some wall space and a burning desire to show off your appreciation of high-geek culture, head over to the Castle Wolfenstein Original Cover Art Painting auction on eBay and take your best shot!

Name Game: The Physical Impossibility of Art in the Mind of Someone Gaming Leels 72 Comments
Comments on