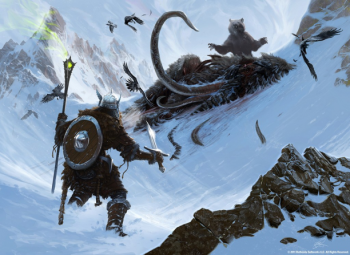 New concept art reveals new environments and (possibly) one of the strangest monsters to ever fight a viking.

Bethesda is continuing to tease out more and more details for Elder Scrolls V: Skyrim, though this may be the most tantalizing reveal yet. The developer has released some new concept art for the game that shows some new, viking-oriented locales in the game. Oh, yeah, and what looks like one of the most bizarre monsters you'll ever hope to see.

Most of the art is pretty standard for fantasy RPGs, featuring medieval statues, creepy dungeons, and mountain fortresses. But the gorilla in the room is the image seen here: that's right, it features a viking getting ready to beat down a bear that's sporting tentacles. That's what it looks like, and several sites are reporting it as such.

It's certainly a bizarre image, but when I threw the concept art into Photoshop and enlarged it, I realized that the image might instead be of a bear standing over the corpse of a wooly mammoth. That said, the possible tusks look a lot like fleshy tentacles, and I think a tentacle bear could be one of the coolest in-game monsters I've ever heard of.