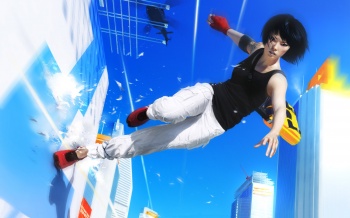 Everyone working on the sequel has been reassigned to other projects, says report.

It doesn't look like the first person Parkour game, Mirror's Edge will be getting a sequel, or at least, not any time soon. According to a report by the blogger "Vikachu," on the Swedish site, Press2Play.tv, EA rejected DICE's pitch for Mirror's Edge 2, and the entire project has ground to a halt.

According to Vikachu, EA DICE boss Patrick Söderlund said that Mirror's Edge was a franchise that was close to his heart, but as much as he might want to make a sequel, it ultimately came down to money, and the game hadn't sold very well. He said that the project had "stalled," and that the people working on it had been reassigned to other games. Presumably, these other games are things like Battlefield 3, as DICE recently announced that it was cancelling work on Battlefield 1943 and Battlefield: Bad Company 2's Onslaught mode on the PC in order to focus on the game. Vikachu's wrote about Mirror's Edge 2 in December, but it seems that no one stumbled across the details until now.

Interestingly though, a report for a different Swedish site, Aftonbladet, made it sound like there was every possibility of more Mirror's Edge. In this interview, Söderlund said that EA was very keen to make a sequel, as Faith - Mirror's Edge's protagonist - was an iconic character; one of the few that EA had. He did acknowledge that the first person perspective in Mirror's Edge made it much harder to get the game right, but added that EA absolutely felt that it was a franchise worth continuing with.

It's quite a difference in tone, but the reports don't have to be contradictory. It's entirely possible that EA thinks that Mirror's Edge is a brand worth developing, but has put it on hold for the time being. Unfortunately, EA is yet to either confirm or deny Vikachu's claims, just saying that it won't comment on rumor or speculation.