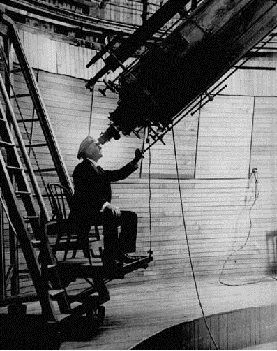 Scientists believe that a planet four times the size of Jupiter is orbiting the sun over a light-year away.

Two astrophysicists believe that soon-to-be-published data will help prove the existence of a massive gas giant beyond Pluto's orbit, in the most remote section of the solar system.

The astrophysicists, John Matese and Daniel Whitmire of the University of Louisiana, first proposed the idea of this massive planet, dubbed Tyche, 12 years ago to explain why comets were coming from unexpected directions. The Oort Cloud, a cloud of ice and rock that inhabits the edge of the solar system about a light-year from the sun, is where many "long period" comets come from, knocked from their orbit by gravitational tides from the rest of the galaxy.

However, in their most recent paper, Matese and Whitmire showed that more than 20% of all long period comets observed since 1898 have come from directions defying currently held galactic-tide theory. They believe that the existence of a very large planet orbiting the sun in the Oort Cloud is the source of these contrary comets.

The pair of scientists have also made several predictions about the details of the planet itself. Tyche will most likely be made up of primarily hydrogen and helium and will behave in a manner very similar to Jupiter, according to Whitmire. "You'd also expect it to have moons. All the outer planets have them," he said.

One of the aspects of the planet that will help it stand out in the upcoming NASA data captured by the Wise Telescope will be its temperature. At -73C, Tyche is much warmer than its surroundings, which hover at just above asolute zero (-273C). "The heat is left over from its formation," said Whitmire "It takes an object this size a long time to cool off."

Even should Tyche be found, whether or not it will technically qualify as a planet will be up to the International Astronomical Union (IAU), the same group who famously demoted Pluto from its status as a planet. Because it is likely that Tyche was a planet formed in another solar system but captured by the sun's gravity, its exact status is debatable. They would also be the ones to formally decide on the planet's name.

Professors Matese and Whitmere believe that the Wise data could reveal the existence of Tyche within the next two years. "If it does, John and I will be doing cartwheels," Professor Whitmire said. "And that's not easy at our age."

Source: The Independent via Gizmodo