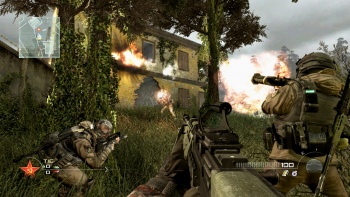 Fledging studio Sledgehammer has never made a Call of Duty game before - or indeed, any game at all - but that isn't stopping it from aiming high. Simply put, its goal is nothing short of creating the very best Call of Duty ever made, at least in terms of review scores.

Sledgehammer revealed this little tidbit of information in a number of online job listings for the studio. Of the thirteen positions available, only three make any mention of review scores, but each makes it pretty clear that Sledgehammer is looking to make a game that gets a Metacritic score of 95 or better. It seems likely that this is blue-sky thinking, rather than a genuine goal, as the highest Metacritic score for any of the Call of the Duty is 94, jointly held by the Modern Warfare 1 and 2, and it's hard to imagine a studio beating the best that series has produced so far on its first try.

As yet, we don't know anything about the game that Sledgehammer is making, aside from the fact that it's definitely an FPS, and definitely a Call of Duty game. There have been rumors that it might include space marines, or that it could be Modern Warfare 3, which some think Sledgehammer might make by itself, while others think it will be a team effort from Sledgehammer, Infinity Ward, and Raven Software. Whatever the truth of the matter is, it's encouraging that Sledgehammer is striving to make an excellent game. It's a shame that that level of excellence comes with a particular number attached to it, but there's not much that anyone can do about that.