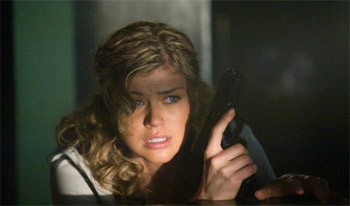 The streets of Los Angeles will soon have a new protector, and now we know who she is.

Actress Adrianne Palacki has won the title role in David E. Kelley's Wonder Woman TV pilot. Palacki is perhaps best known for her appearances on the TV show Friday Night Lights, and has also played parts in Smallville and the Aquaman pilot.

It seems that Palacki bagged the role of Wonder Woman in a "decisive manner," and was the only actress invited to screen test for it. In the re-imagining, Wonder Woman is a vigilante crime fighter on the streets of Los Angeles, while Diana Prince - Wonder Woman's secret identity - is a successful corporate executive who spends a lot of time trying to balance her commitments to her job and her crime fighting career. Jeffrey Reiner, who has worked with Palacki before on Friday Night Lights, will direct the pilot. His previous work includes the pilot for Caprica and - rather charmingly - a few episodes of Mighty Morphin' Power Rangers.

It's unclear whether the more fantastical elements of Wonder Woman - like her Golden Lasso that compels people to speak the truth or her bracelets that can deflect bullets, not to mention her super strength and other powers - will feature in the pilot, but it's hard to tell very much at all from such a short description. There are no details about when the pilot will air, but as the lead role has only just been cast, it stands to reason that it will be a while before we see it.